Today, behavioral economics is more than just a hip buzzword. Instead, it’s an essential school of thought, vital to all industries, and especially to those in the nonprofit world.

To help you understand how, exactly, this works, here are a few real-life examples from modern nonprofits: 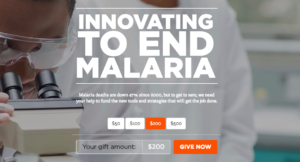 The above snapshot of the end of the year fundraising campaign landing page that we created for Malaria No More, an outstanding example of behavioral economics at work which contributed to a 165% year-over-year increase in fundraising dollars!

In this case, the tenant being used is called anchoring. Anchoring is a common behavioral economics tactic that’s used when an organization wants to encourage people to make donations.

Here’s an example of how it works: in one 2011 study, two groups were asked if they would be willing to make a contribution designed to save tens of thousands of offshore seabirds from a toxic oil spill by making a charitable donation. The first group was asked if they’d be willing to donate $5.

By understanding the functions of anchoring, and knowing how to utilize it in your donation requests, you can improve results and raise more funds.

When implementing this approach on a page, conduct some testing to figure out which anchor amount works best for your customers. Keep in mind that high donation amount anchors make lower donations look more attractive. For help in selecting an anchor and testing its effectiveness, contact us: [email protected]

The World Wildlife Fund has mastered behavioral economics by incorporating both authority bias and sympathy bias, which have been shown to have a positive effect on charitable donations, into their website design.

Both these behavioral economics tenants are very efficient when it comes to creating an emotional response in supporters. While authority bias states that people love social proof (and is outlined in the Leonardo Dicaprio quote below), sympathy bias states that people are more likely to donate when there is an “identifiable victim” or someone to sympathize with.

Both are evident on the home page, as seen below:

By including a quote from a famous person, this organization improves the chance that people will donate and offers the social proof on-the-fence supporters need to drop in. 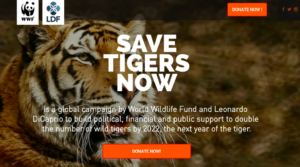 By showcasing a picture of one of the animals the WWF works to save, the NPO inspires people to take action and get involved.

Check out how Charity Water positions the statement in the screenshot below: 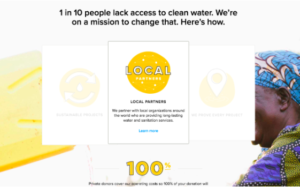 While it’s a bit different from the other examples on this list, most notably because it’s not a specific fundraising campaign, Go Fund Me is a great example of many behavioral economics tenants, including anchoring, framing, audience effect, and the herd effect.

Go Fund Me creates fundraising goals and uses a meter to showcase goal progress and encourage people to continue supporting it. In addition to establishing an emotional connection between the donor and the cause, the meter tracking also shows how needed a new donor’s contribution is.

Here’s an example of what meter tracking looks like: 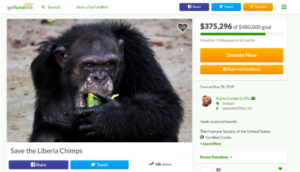 Behavioral Economics and Design: One of the Best Things to Hit Your Campaigns Yet

Ready to learn more about incorporating behavioral economics into your fundraising campaigns or web design? Contact the team at Creative Science today!